The last week has been pretty amazing, especially the other day everything just seemed to fall into place. 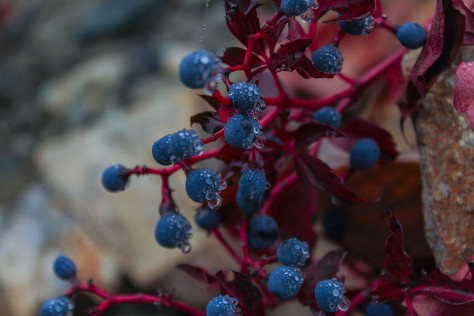 First on the list of things, my landlord is back in town and winterizing the whole property including my Tree House; that means it will be nice and toasty in here when I do turn the heater on during snow season. I’m pretty fortunate that I really only have to turn on the heater every so often since the Tree House holds heat rather well.  Patrick and I had some good conversations and I expressed how amazing this place is and that he should count on receiving steady rent checks from me.

I had a few days off that were pretty relaxing, I forgot how fun days off are when you actually work… it kind of gives you something to look forward to after a few days of pushing yourself to do great!

During one of the days off I managed to nab myself a set of Encyclopedia’s… for free! They look fantastic and the owner was just going to bring them to the dump, I’m pretty happy with them so far. Going to get these books was pretty much what started my adventures up Silver Star road; the fog has been pretty heavy as the weather is slowly converting to Winter and I had to jump on the opportunity to take pictures (see photo above for reference).

I’m sure there was a lot more things that were some what eventful but yesterday just trumped it all. I’d have to say it was just one great thing after another… Also I didn’t write much on my blackboard this week.

The day started off by waking up to a video of the girl I’ve been talking to, (I’ll explain kind of what happened in my next blog). I was a bit worried that I was to be another victim of Catfishing.

“A catfish is someone who pretends to be someone they’re not using Dating sites or other social media to create false identities, particularly to pursue deceptive online romances”.

I won’t get into the boring details but it has happened to me before so naturally I was cautious… but I digress. The morning was nothing but smiles, it’s hard to explain the emotion… I was relieved and happy to say the least, maybe a bit giddy.. go ahead laugh ;). Following that I had a nice breakfast then headed up Silver Star Rd for some pictures.

I stopped at a little subdivision that was on a hill that looked over the city but the fog was a lot stronger than I had previously experience a few days prior… it made for more challenging photo’s and it was a bit chilly out, but I made do with what I had.

I had taken some pretty impressive photo’s, they impressed me anyway! I decided to head further up the mountain to see what I could get for a different vantage point and that’s when I decided to do a time-lapse for you. The intention was to show everyone have neat the fog looked, as I kept driving I cleared the fog and the sky was blue without a single cloud. What a surprise it was the higher I went, keep in mind I’ve never actually gone to the top to Silver Star Resort.

I had finally made it to the top where the Resort is and what a strange and cool little city it is up there, the houses look like something out of a movie and in the Winter it will probably look like the North Pole with elves running around… you’ll have to follow the blog to find out! I pulled up and there were huge mountain in the distance with massive peaks and snow on them. I left everything in my car but my camera and went for a nice little walk.

After I did some rummaging through some bushes and paths I found a nice peaceful area that the mountains just blew open, it was nothing short of breathtaking. I found a comfy spot and decided to shoot a V-log (Video Blog). This is a new experiment and I think it’s kind of fun so let me know what you think… and don’t forget to share! Oh yeah it was like another world above the fog/ clouds… I could have worn a T-shirt and shorts it was so warm.

After spending some quality time in Nature and just listening to the sounds of the wind and the mountains it was time to head home. It would have been really cool to have filmed my way down but my camera battery was dying… fail on my part for not charging it earlier. Heading down the mountain I stopped once or twice to pull off some great photo’s hoping my camera wouldn’t die. As I descended I had my windows open, wind breezing and a giant smile. As I continued downward I actually had to shut the windows because the temperature drop through the fog and under the clouds was astonishing… like I said a whole other world. 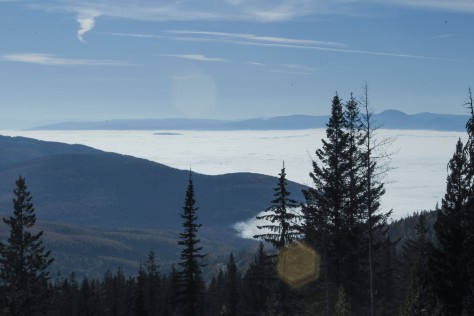 I got home and spoke to my friend Satyama who does massage therapy, it was also her 40th Birthday and she looks great for 40. We talked about me getting a massage since my back was still sore from the 3 months of futon sleeping, she said let’s do it now; I procured some money and went for my therapy session. Satyama has done a lot of learning from around the world (Eastern Culture) and does Chakra clearing as well during the massage; I have to tell you I have never had such an amazing massage in my life!

Thanks for checking in again and let me know what you think of the V-logs. Don’t forget I’m opening up guest posting and to shoot me an email, the info is on the side bar at the top.

“There are no coincidences; life comes at you as it’s supposed to”