The last few days have been a bit challenging. Despite all the problems that arise in Haiti I still find myself happy.
For the most part the last week or so has been nice, there’s only 1 volunteer and she’s been fun to have around. There was a few nights we went out especially to get emily out of the house. One of the nights we went to a nice place that Em’s friend owns, and it was a friends birthday. The three of us were actually pretty tired so we all almost feel asleep but waited for the cake to be cut etc… it was fun to be in the “VIP” section though. Another night we went to a sport bar/ lounge to grab a bite to eat and then head home… we were all tired like the other night. If you were wondering I had the Buffulo Shrimp Wrap, the pricing was really cheap compared to American standards! One thing I found rather comical was on the door it said the usual: no guns, must be such and such an age to enter and then… No protitutes. I don’t know why I found it so funny maybe that I though ‘How the heck would you tell that?’, I know there’s usually a certain dress but I’m sure just like in Canada some girls that go downtown to party dress… let’s just leave it at that.

Before we left Emily noticed some adverts on one of the moniters and saw that Tuesday nights are Kareoki nights… Yes we ended up going and it was a crazy night. The lounge was pretty busy, Emily and the volunteer were buggin’ me to go and sing with them which I was totally against. After a while I was going through the song book and decided to man up. I picked Bohemian Rhapsody by Queen. I got up on stage nervous but proud, unbuttoned the top button on my shirt to reveal some chest hair and the singing begain! After I was done I had a lot of people come up to me saying I did really well and that I picked one of the hardest songs to sing to but that I did amazing… I still thought it was bad but everyone else insists otherwise. There’s a video out there somewhere so I’m sure you’ll be able to watch it at some point (I’ll keep you posted).
Not everything is fun and games as my computer decided to conch out on me. I’m pretty certain it was the hard drive as my computer model was recalled for such reasons. I never had a chance to get it fixed because the nearest Apple shop was 2 hours away in Canada and 1 Hour away in the U.S. … I guess I’m paying for it now. I don’t trust anyone with a Mac in Haiti, if it were a PC I’d risk it… but not my Mac. I figure I’ll wait it out until I have to head home in a month or two. I joked about; since I can’t finish my book… I guess I’m not coming home; a few people didn’t find that funny.
The other day Emily, Maddie (volunteer) and I went to Montrouis to check out the house we helped build and to see if it actually got finished; Fortunately the important stuff did get finished but they were still asking for more money. At this point Emily and I were a little tired of being asked for more and more as they had been given plenty to have completed a decent house by now. Seemed like now they wanted finishing touches. 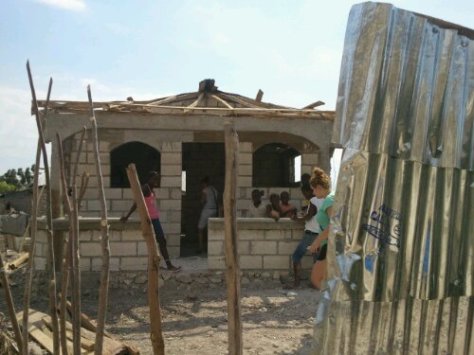 Before we left we checked out everyone and their children as we usually do, we almost left when one of the babies that we usually play with… wasn’t so happy and he was very sick. The kids in the mountains eat rocks and many other dirty things, even after education they have a hard time breaking habits… but they are habits that will kill them :(. Em and I took the baby to a dear friend Maeve who helped us to a hospital, a very small one. We had things check out for the baby, after a bit things started to get kind of crazy as a women had recently died there and the family was very upset, we moved into a back room incase rocks started to fly… which is not unusual. After waiting a bit for things to cool down we had a knock on the door, they wanted to put the dead body in the room we were in, so we decided to leave. As we were leaving the baby hurled up everything we had just given him and all over Em… and a bit on the dead body… yikes. Funny thing was, I was litterally about to ask Emily if she wanted me to take the baby, I’m glad I waitied. Long story short we got the mom and the baby to Port Au Prince were he could be taken care of properly. It was a long day/ night and stressful but satifying. 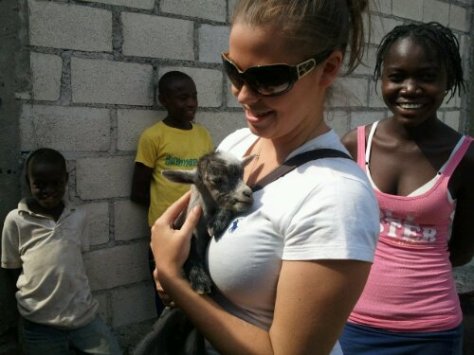 There was pretty much 2 reasons I was upset about my computer crashing. One is that I couldn’t keep writing my book, two was that I would have to write my blogs on my phone, other than that I was fine with losing all my photo’s etc… despite having compilled a lot of stuff. Today I took a shot in the dark… Ironically we’re in the dark since both our generators are ka-put at the moment. I grabbed my Bluetooth key board and tried to Sycn it to my phone… it worked! So now I’m writing with a keyboard. It’s better, but the screen is still only 2.5 inches.

Oh today (Wednesday). I made a nice breakfast for Em and myself and two other guests in the house; Bacon eggs and juice… So yummy! We had some sac races and broke out some kites today as well… I don’t think I’ve every had so much fun flying a kite. Around 2:30 I felt like I had hit a wall and decided to take a nap, I’m all refreshed now though.
Since it will take a while to raise money to go home… yes I actually have to raise money to go home, I’m going to start raising money for my return flight before my Visa
runs out. As usual if you’d like to help contribute there’s a donation button on the side bar or you can contact me through email me at Justinparkinson@hotmail.com
Thanks in advance for the support I hope everyone has a great day/ night!

“Ignorance is no excuse in life whether in the first or third world. We all have the right to educate our selves especially informally. Strive to reach your goals, dreams, and aspirations. Every action and lack there of has consquences. Be strong; keep yourself and other safe. Life is short but more so if you don’t try. Be happy with what you have and live life like you’re the boss.”