Sorry about the delay in blogging again, I think the theme for this post is pretty relevant. First off my computer screen won’t turn on… why? Great question I’d love to know as well since I had shut it off, then tried turning it on the following morning with that issue. In the mean time Emily was kind enough to lend me her spare computer to use. Now I can keep you up to date on things… well try anyway.

Thursday (Dec 6) Emily and I went to the hospital with the twins to get some more tests done. We got there super early to get things done and because they told us we had to be there in the morning. So the fun started when we got there. We got sent to one area waited for ever as Emily and I were passing out from being so tired it was around quarter to 7 AM. Finally the nurse got to us and sent us to the malnourished clinic where we didn’t need to go; After nurses from there found out what we needed we were sent back. I’m just going to cut this story short and tell you we got sent to about 4 other places in the hospital after that. Em and I eventually got to the right place and got the tests done. 4 hours at the hospital for something that took less than 20 minutes TIH (This is Haiti).

I learned TIH from Emily the other day after we went to the hospital for more test which weren’t even available during the weekend despite being told to return Saturday and Sunday. What had happened after we left is what brought on the TIH quote. We were headed back when the drive drove into a pot hole that was filled with water and we got stuck (by pot hole I mean hole 15” by about 20 feet”; I was worried that the engine would get flooded luckily it didn’t. Since we were stuck the driver yelled out to this huge dump truck driving by and asked him to back into us, as to push us further into the pot hole, but would get us un-stuck/ moving… it worked. Never really imagined myself being rear-ended by a dump truck into a flooded pot hole with 2 small infants in our arms.

Saturday night came around and we finally got power back! It only took 3 day maybe 4? I lost track. Our power system finally got fixed and it only cost us $25… this time. As I write this post I’m actually using my solar charger because despite the power being fixed, the government likes to choose when they feel you can have power.

Because my other computer broke I kind of lost track of what happened on what days, so I’m just going to throw out some random stuff that happened. The other day one of Emily’s friends came over to visit and it was a great visit first off because Maeve is a blast to hang with, secondly we got to blow of steam about all the nonsense we’ve been having to deal with; the hospital, lack of power, low water levels, and the desks being almost 2 weeks over due being finished. Later at night the 3 of us did some photo’s in the dark like shadow pictures and light painting :).

I recently got some video of us in traffic and how it flows in Haiti, this time it was rather smooth nothing too crazy. I plan on making a time lapse and posting it but unfortunately I won’t be able to post it until I return from Haiti and the end of January. I have to tell you the traffic and the way things work would probably baffle most of you and give the rest heart attacks.

The other day I played soccer with the kids from our orphanage and from the tent city. Soccer consists of a partially deflated basket ball, 1 ½ foot nets made of rocks, and kids that never run out of energy. I think I did rather well. I was exhausted and luckily my legs weren’t killing me the following day, It was so much fun though.

Today Sunday (Dec 9) the desks are almost done they just need some wood added so that you can sit on them and have a writing top. Some of the families from the tent city came over so that we could register them for our “non official” English classes (for the kids) since we’re not a registered school. I think we have almost a full class and it starts tomorrow so please pray for us and that all goes well!

So it’s super hot out today I’m in the sun so that I can get some colour and so the solar chargers stay charged a bit while I used the computer. I forgot to mention as well that the computer I’m using has to have a power source because the battery won’t charge. That means when the solar charger dies computer shuts off… Bring on the SUN! **UPDATE** My face got a little burnt.

Yesterday was the birthday of one of the girl who Emily used to take care of at the old orphanage, so today Emily invited the the girls from the old place that she used to take care of over so that we could have a party. We all just had lunch together, there was just the perfect amount of chairs which was great. Later tonight we are having pizza and I think we’ll have balloons too! 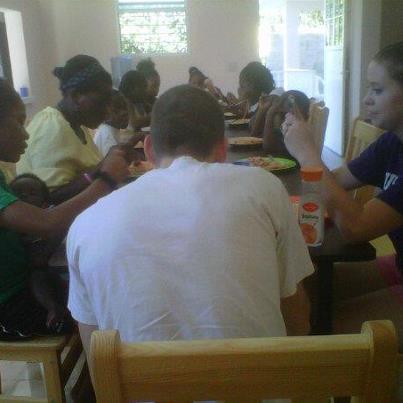 Thanks again for following my blog every one have a great day.